Okay, this is far from me giving you a 101 class on modeling, because when it comes to drawing/modeling/things of that nature I suck pretty bad. Nevertheless, I amazed myself at how quickly I whipped up a "stick man" model with a basic skeleton using Blender . 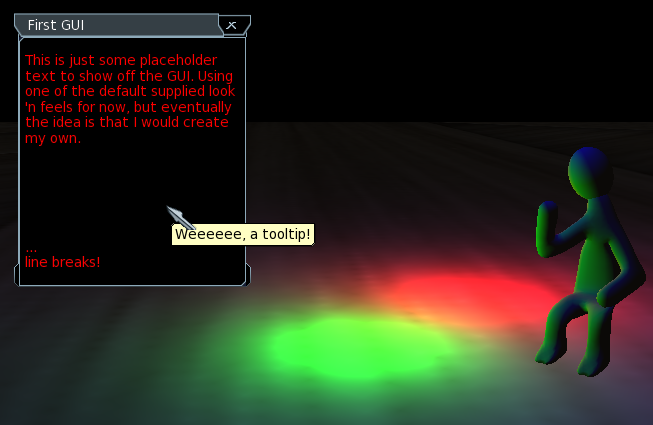 He's in a sitting pose, waving (I think). Yeah, I have skills cough. Anyways, other than a crash here and there, Blender is a pretty decent piece of software. Some of the keyboard shortcuts are non-intuitive but once you get them down you'll be unstoppable.

That screenshots also shows off my integration of CEGUI  into my WIP. I struggled with two issues that I'll share with people. The first issue was that you need to have the OpenGL viewport set up correctly when initializing CEGUI. Unfortunately my initialization was occurring before I called glViewport, but that was easily resolved. The second thing was that having any VBOs / VAOs bound messes up CEGUI (for now). Be sure to release any bound buffers/arrays before rendering things.

CEGUI is a pretty hefty library, but it looks to be incredibly robust and still actively developed. I loved how I could manually inject input events into the CEGUI system, which meant easy integration into my own windowing system. I noticed that some other systems used existing input libraries or hooked into something like GLUT  or SDL  . I also love the ability to use describe things in XML. I think CEGUI and I will get along quite fine until I decide to write my own UI system.

There was a bit of messing around getting things to link properly, but I managed to get everything working in the end. I'll finish off by pointing out qmake . I use it for my Makefile generation and I absolutely love it, mainly because it's incredibly simple. CMake  is another option if you happen to be looking for one.